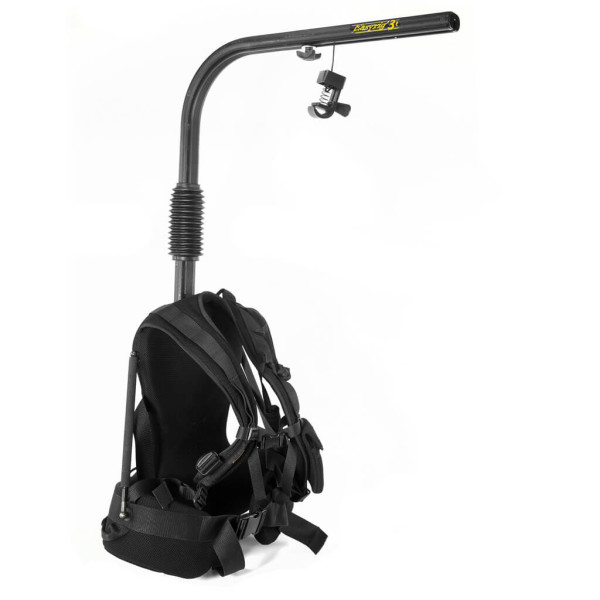 The perfect device for facilitating the work of the operator during long-term use of handheld cameras. Perfectly balanced and comfortable design provides full equilibration chamber and removes the burden from your hands. Quick assembly and willingness to work deserve high marks. In some cases, may replace the well-known system of “Steadicam.”

Easyrig gives you the freedom when shooting in different angles and positions, pushing the boundaries of creativity and imagination by providing maximum flexibility. Frames that leave the viewer indifferent, become part of your project. Remove the camera from his shoulder and put it into position. With Easyrig you will not feel the weight of the camera. Using the system will give your new visual production quality. The main thing that gives the system Easyrig – holistic coverage and the internal disclosure of any object that can be to approach a man with a camera, the preservation of the natural and the creation of new visual navigation, the discovery of an unusual perspective on familiar things and the world at large. Camera movement – one of the best features you can offer viewers. Movement, creating the effect of volume of space, animate your pictures. Everything you need to do – Stability Easyrig. Easyrig retains all the advantages of using cameras for shooting from the hip, with it, the level of the waist, hips or lower point. Tension in his arms and part of the body of the operator, inevitably occurs when a long shot, when the system is greatly reduced Easyrig or eliminated altogether, depending on the perspective taken. Cord of the system supports the camera, and vest evenly distributes Easyrig its weight from the neck and shoulders to the hips, easing the burden on the operator’s hands. The system stabilizes the camera Easyrig balancer tensioner cord inside the pole. It was he who raises or lowers the camera in the allowable range. The principle of operation of the stabilizer device resembles seat belt. Universal Vest stabilizer Easyrig 3 Cinema is fixed on a vertical rod and adjusts to fit the operator. There is a safety snap hook to prevent the fall and damage the camera. Easyrig ideal for recording interviews, news, sports broadcasts, movies, business surveys and other situations where shooting is required freedom of movement and the relative stability of the image.